Living in land-locked Colorado didn't lend itself to a lot of fresh seafood dinners.  Sure, we could feast on buffalo burgers, venison stew, or elk medallions, but pelagic fish cooked up at a Colorado restaurant could hardly be advertised as fresh.  And sushi?  That was just asking for trouble.

On board, however, the sea has become our supermarket.  And fresh?  You can't get any fresher than hauling a tuna aboard and slicing off a piece of sashimi to nibble on while you fillet the rest.  Again, I will say, I'm not an adventurous eater, but I'm willing to try anything.  Well, sea turtle cooked in coconut milk?  No way.  (yes, this was offered to me on more than one occasion)  Okay, almost anything.

Since visiting New Zealand, I have had my first tastes of raw oysters (not again... ever), steamed green-lipped mussels (yum!), and raw scallops (double yum!).  Our palates are adjusting as we travel to far away places and jump on the "eat local" bandwagon.  From ocean to science lab to table.

Here's a journal entry written by Michael about the day we caught our first squid...

“Come over!  We are catching squid off the stern with our squid jig.”

So Dad tells us to hop in the dinghy, and wait for him.  He hops in.

“Come aboard!” says Matt when we pull up behind their boat.  As I step onto the transom, I notice a bucket full of… SQUID!

“Michael!”  Conrad shouts to say hello.  “Dad, can Michael have a turn fishing?”

“Michael, come on down and try!” says Matt.  I shudder at the thought of taking a squid off the lure.  But actually, I don’t have to take a squid off the lure, because I don’t end up catching one.  Matt tries again himself, and quickly catches another.  Unfortunately, when he puts the squid in the bucket - SPLAT!  Dark black ink juts out of the squid’s ink sack, right onto Johnny’s bright orange shirt!

We put one squid in a separate bucket to examine it.  Its rubbery skin turns blue to match the bucket!  When I touch it, its spots return.  Johnny pets it like it is his new pet!  We all keep imagining that it will torpedo out of the bucket at us with one squirt. “Target locked,” Mark says when it aims toward me. 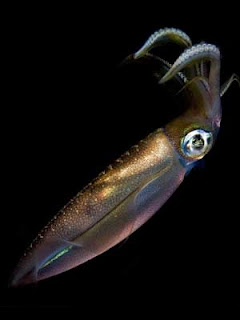 Squid are fascinating sea creatures.  They belong to the Phylum Mollusca, but do not have an outer shell.  They are more specifically cephalopods, related to the octopus.  In relation to their body size, they have the largest eyeball in the animal kingdom.  (In case you're wondering, no, I did not eat the eyeball.)  They are believed to be the fastest invertebrate on Earth, using jet propulsion to dart away from predators.  But the skin of the squid is what I find most amazing.  Chromatophores in the skin allow them to change color and pattern in order to blend into their surroundings and communicate with each other.  Bio-luminescent organs within the skin in some species enable them to glow and blink in various sequence.  Our captured specimen gave us a beautiful display in the bucket as the kids cautiously, and not-so-cautiously, poked and prodded it.

Interestingly, the ink they squirted out all over Johnny and on the deck and stern steps of our friends' boat was more of a gel than I expected it to be.  It was almost stringy.  Just FYI for any boaters reading this - remove any squid ink with saltwater quickly before it has time to dry.  If you don't get to it in time, the cleanser you use for your fiberglass should work, applied with a little elbow grease, of course ;).  And the best tip I've learned for squidding?  Always do it on someone else's boat!!! 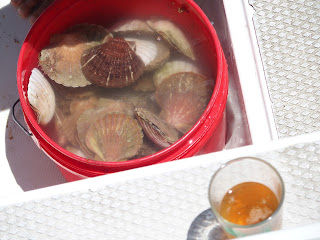 Later that day, Mark and Matt got together for a cold beer and lots of shucking - scallop shucking that is.  They'd gone out the day prior to free dive for the "fillet mignon"of the sea and had found a vast bed of hundreds of them.  Of course, there are specific regulations here on how many one can pillage and of what size.  In New Zealand, one diver can take 20 scallops (at least 10 cm across) per person in the fishing vessel.  That means if we happen to anchor the boat near a bed of scallops and Mark dives off the stern, he can pick up 80 legally.  We didn't take nearly that many, but between both families, they had a fair amount of shucking to do!

This was all new to us.  We opened a shell and had to take a peek inside, trying to identify all of the parts.  Along the outer edge, the scallop has about 60 little eyeballs that watch out for predators by detecting changes in light and movement.   The adductor muscle (the part we would eat later) is the light colored circular portion that attaches the bottom shell to the top.  The scallop uses this to open and close itself and shoot out jets of water for propulsion, a similar mode of locomotion to the squid.  Incidentally, the squid and scallop are both mollusks, but unlike squid, they have an outer shell, putting them in the bivalve class. They are the only bivalves that can swim freely, although their 'swim' looks more like a 'clap'.  One more fun fact... the dark orange organ is the female gonad, which is edible as well - mmmmm.   And yes, I did try that bit, too!


Our friends, Matt and Jen, on SV Perry were our cooking instructors that evening.  They did much of the sous chef work - making the rice (with rice vinegar and sugar added for taste and texture), slicing the veggies and prepping the squid.  Then they taught us how to make a proper sushi roll and relayed tips from the galley about how to best bread calamari and fry it without any casualties; although, Matt did almost lose an eye to spitting hot oil.  Thankfully, he escaped the galley - sight intact - in time to gaze upon the spread of sumptuous seafood that filled the table.  With a quick toast to all the work that went into this meal and a nod to the fascinating creatures that would soon fill our bellies, we proceeded to absolutely chow down.
P.S. - As I was researching and writing this blog, I began to wonder if perhaps the "squid" we caught and consumed were actually creatures I'd seen while diving called cuttlefish, due to the undulating skirt they had around their bodies.  Forgive my ignorance.  I'm still not 100% sure, but either way, we ate it and I'm still living to write about it! How's that for adventurous eating?!!  Just for fun, here's a list of edible mollusks to satisfy your culinary curiosities and set my stomach at ease! 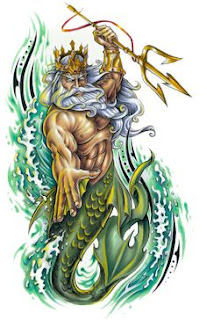 The ceremony of "Crossing the Line" has a storied history, spanning cultures, navies and tradition. In the U.S. Navy, when a ship crosses the equator a time-honored ceremony takes place. This is a Navy tradition and an event no sailor ever forgets.  With few exceptions, those who have been inducted into the "mysteries of the deep" by Neptunus Rex and his Royal court, count the experience as a highlight of their naval career.  Members of Neptunus Rex's party usually include Davy Jones, Neptune's first assistant, Her Highness Amphitrite, the Royal Scribe, the Royal Doctor, the Royal Dentist,  the Royal Baby, the Royal Navigator, the Royal Chaplain, the Royal Judge, Attorneys, Barbers and other names that suit the party. Officially recognized by service record entries indicating date, time, latitude and longitude, the crossing of the equator involves elaborate preparation by the "shellbacks" (those who have crossed the equator before) to ensur
Read more 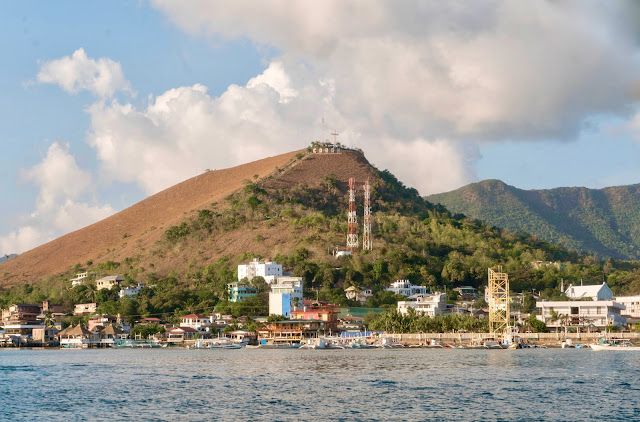 Mount Tapyas, Coron, Philippines Seven hundred and twenty. That’s the number of steps we climbed today to reach the top of Mt. Tapyas.  From our achorage, we can see the C-O-R-O-N sign lit up every night along with a tall cross and a few cell towers, for added ambiance. We woke up before sunrise to avoid the heat of the day and started our ascent.  Only seven hundred and twenty steps to go!  Although many tourist attractions here are empty these days, Mt. Tapyas was buzzing with people of all ages getting in their morning workouts.  It was encouraging to see so many people making health a priority in the wake of a lengthy lockdown.  Kindly, the creators of this stairway thought to post numbered increments on the stairs.  Somehow, it made the 720 seem more achievable when broken down into smaller chunks.  Each time we reached a marker, it was a bit of a celebration!  (And a great excuse for a brief rest to catch our breath!) We've only just begun Periodically, we’d
Read more 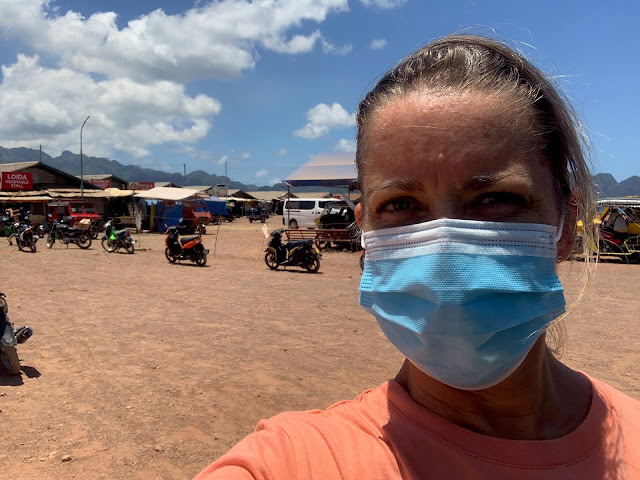 The New Normal Well, it's been eight weeks since the quarantine regulations were put in place.  Gradually, the resort has closed, leaving only a few staff left.  Our Covid-19 family has dwindled as people have found rare opportunities to travel back to their homes.  In some ways, it feels like just yesterday when all this started.  In other ways, it feels like it's been decades. The focus for me has been to maintain routine and a realistic perspective during such global upheaval.  It feels weird, though, to continue living life as usual when so much of the world around us is changing and is anything but usual.  I try to take it one day at a time.   What can I do today to boost morale and maintain momentum?  Here are some of the ways we fight the boredom/blues bug amid the monotony... Playing Monopoly Marathon! Our onboard game cabinet hasn’t seen this much action since our 20-day Pacific Ocean crossing.  Some old favorites have made a reappearance, especiall
Read more